Throughout my life I have had quite heavy eyelids, but due to their unusual green colour, they have always been one of my most striking facial features.

Over the last five years I have noticed a dramatic change in my upper eyelids. They appear to be getting increasingly lower, sometimes resting on the eyelash line, I have also stopped wearing eye shadow as it seemed pointless due to the lack of visible upper lid. 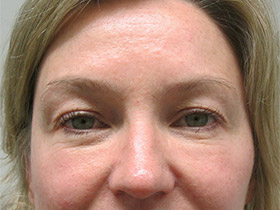 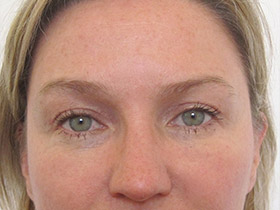 Blepharoplasty before and after the procedure

With my 50th looming in the not so distant future, I decided to do something about my problem and, after much research, found the most wonderful cosmetic plastic surgeon, Ms Angelica Kavouni.

Angelica gave me the option of having surgery under local or general, I opted for the former, as I feel I am quite stoic, and also wanted to be able to leave hospital under my own steam, without relying on others to collect me.

I have to say, on the day of surgery I did feel a little anxious, but having full confidence in my surgeon helped to relax me. Also the staff at the Cadogan Clinic were wonderful and I felt very much at home.

Angelica marked the incision line on my eyelids, injected the local, and started the procedure with all 3 of us chatting and listening to some great tunes on the theatre ipod, which made the overall experience oddly relaxing, although I did feel a little disconcerted twice during the procedure.

First was during the local injections which were not pleasant, although very brief! The second time was when Angelica used the diathermy to stop capillaries bleeding, as it smelt like burning flesh. After a bit of reassurance, all was well!

It seems I "oozed a little" during surgery (I assured Angelica I had not touched a drop of wine for two weeks prior to surgery, but I don’t think she believed me!).

The procedure took just under an hour and, after sitting for a bit with icepacks on my eyes and a cup of sweet tea, I was ready to leave.

The journey home was interesting – wearing my Jackie O sunglasses in the dark of night, and on the brightly lit tube! Some slight "ooze" from my left eye whilst on my overground train journey was unfortunate, but I managed to subtly swab this away with a spare Burger King napkin without alarming my fellow travellers.

The taxi driver at the other end brashly asked me why I was wearing dark glasses at night, I brusquely told him I suffered from migraine and the lights hurt my eyes. Seemed to quell his questions!

Arrived home safe and sound to spend the evening swallowing Arnica tablets, applying Arnica cream and periodically dipping my head in the freezer, with bruising starting to declare itself, I’m off to bed. In goes the sticky antibiotic eye cream and it’s light out, literally, as I can no longer open my eyes, they’re stuck together. So ends day 0.

Well, survived the night! Bruising is pretty impressive today, no pain at all which is weird. I think I shall spend the day alternating ice with Arnica cream applications. Can already see the difference in my eyelids (am VERY excited!).

I can’t wait for the next week to be over so I can see the actual result. Angelica says I need to keep a check on the bleeding and to let her know if I have any concerns.

The bruises are bad, but to be honest I bruise easily anyway, so am not at all surprised.

That’s all for day 1 folks.

Could it be possible that my eyelids feel "lighter"? I have to say my eyes do not feel as tired as they would normally if that makes sense. I wonder if the weight of my eyelids weighed more on my eyes than I realised. Interesting.

Arnica cream and tablet regime continues. Not much else to say really. Again no pain, which is great. I can tell the bruising has reached its peak as the edges are changing colour already. I can tell the result is going to be amazing, can’t wait to get these steristrips off as they are very itchy, Angelica says I can remove them tomorrow!

I’m almost there! Still have a lot of swelling but the bruising has almost gone. Dissolvable stitches have gone and I’m ready to rock! SOOOOOOO pleased, thank you Angelica!

As I mentioned before, it’s very strange, as my eyes feel so less tired and "lighter" than they did prior to surgery. Once I have them, I’ll post my before and after photos.

Here’s to a much brighter Xmas!