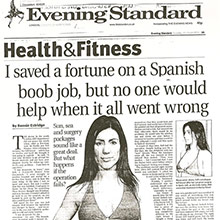 The doctor in the south London A&E department did not mince his words when, after a five-hour wait, he finally saw Sefi Mumoz. After refusing to examine her left breast - which was so swollen and hard she thought it was going to explode - he said: "It was your decision to go abroad for breast implants and not have your surgeon nearby for follow-up care. So it's your problem - I am here to save lives."

"I was desperate, in tears," says Sefi, a 31-year-old dancer from Greenwich. "I went straight to another hospital and waited for a further four hours, only to hear the same thing. At the time, I was so upset and angry. But now I realise that this was justified. I had gone to Spain 'on the cheap' for something these doctors thought was frivolous, and now, because I couldn't afford to go back to see the surgeon, no one wanted to pick up the pieces. And who could blame them?"

Sefi opted for her sun, sea and surgery deal because the operation was cheaper in Spain - and recovery in the sun was infinitely preferable to cold and rainy London.

"I was desperate for the operation," she says. "My breasts were beautiful until I turned 20, but because I became a tennis professional at 16, they suffered. Female tennis players tend to end up with ugly breasts. Sports bras cannot work miracles.

"By the time I was 28 my breasts became very 'empty' and I hated them. I had come here to study English and Italian and had to take part-time jobs waitressing, so I never had any spare money for a boob job. When my grandmother died and left me £2,000, I knew exactly what I would spend it on.

"But I went to see a few surgeons in London and discovered that the cost of implants here was about £3,000. Then a friend who lives in Spain told me her mother had had her nose remodelled there. Taking into account the exchange rate and cost of living in Spain, I could afford the flight and the £1,800 operation. I called the surgeon immediately.

"The doctor seemed professional and friendly, so I decided to take a two-week 'holiday' to Alicante. I liked the doctor at my consultation - he seemed so kind. He agreed that my breasts could be improved and suggested silicone implants which would take me from a 34B to my original 34C.

"I was worried that I might end up with breasts like balloons, but he assured me that they would look and feel natural, and would last a lifetime. He pointed out that all general anaesthetics carried a risk, but assured me that, otherwise, there would be no problems. He would take the stitches out and check me over before I returned to London and that would be that, although I could visit him again in Spain if necessary."

A couple of days later, Sefi had the operation. Despite feeling sore for a few days, she was delighted with her "new" breasts. When the bandages came off, she was amazed at how natural they looked. "They were swollen - but I expected that. I saw the doctor twice more before returning to England. feeling very happy."

The problems started eight months later, when Sefi noticed that her left breast was rock-hard. "I called the doctor in Spain and he told me to wait a few weeks as this could be hormonal.

Frankly, I couldn't understand why my periods should make much difference, especially in only one breast. A month later the left breast looked completely round, like a big tennis ball. If I tapped it, it felt like a piece of wood. The shape was completely different to the right breast. I bought a cheap flight and went back to Spain.

"This time the doctor was concerned and said that this was known as 'encapsulation', when the body creates tissue around the implant and causes it to harden. Apparently, this is a common problem and is linked to metabolism, but he had not mentioned it at the outset. "He knew that I could not afford a second operation, so he tried to manipulate the implant and break the tissue 'capsule' surrounding the silicone. This hurt so much I was screaming in pain. He then said that he must open the scar and take out the part of the capsule which was particularly hard. He did this in his office, injecting a local anaesthetic into my breast. Being awake was horrible. Despite the anaesthetic it was very painful and I was terrified. I was aware of everything that was going on - feeling instruments being poked around inside my breast was like torture.

"Initially, my breast looked better, but once the swelling went down, the area where the part of the capsule had been removed felt empty and left an odd gap in my cleavage. The right breast still looked great, but the left was lower and still hard. My boobs didn't look as though they belonged together.

"I wasn't happy, but the doctor didn't offer any solutions. His whole attitude changed. He became very stressed and told me the whole thing was in my head. It was clear he had written me off.

I flew back to England in despair. I was worried that I was deformed, that my body looked ugly - I hated undressing in front of my boyfriend. After a while, even the right breast was feeling a little hard. I saw doctors in Harley Street but no one was interested because I had not been their patient.

"The anxiety drove me to sit in A&E departments and make many visits to my GP, to no avail. After three years of trying to get help, I knew I had to stop thinking about this because I didn't have the money to do anything about it.

"However, at the beginning of this year, my boyfriend suggested that he take out a bank loan for me to have corrective surgery. I couldn't thank him enough. I had heard about Angelica Kavouni in Harley Street, who specialised in breast surgery. I decided that a female plastic surgeon was more likely to understand how I felt.

"Angelica told me about new silicone implants which were teardrop shaped and safer than the old-style ones I'd been given in Spain, which had a 70 per cent chance of hardening. She suggested putting them below the muscle [normally they are above] to make them less likely to encapsulate.

"The downside, she said, was that there would be a lot more post-operative pain. She was right, but, within a month, it settled down and my breasts looked 'normal' for the first time in years. It cost my boyfriend £4,500."

To Sefi's horror, it turned out that the old implants had leaked, which can cause infection and may have happened when the Spanish doctor broke the capsule. But she was determined to put the past behind her, knowing that Angelica was close at hand.

Today Sefi warns against having surgery abroad. "I have seen all the advertisements for 'surgery holidays' and heard people saying what a great idea they are. I even have a girlfriend who paid just £800 for new breasts in Thailand. But it's a huge risk.

"Some surgeons come to London once a month for after-care clinics, but this is no use if they are not there when you need them.

"Don't be seduced by a cheap deal, because it could cost you a lot more money and pain than you bargained for." 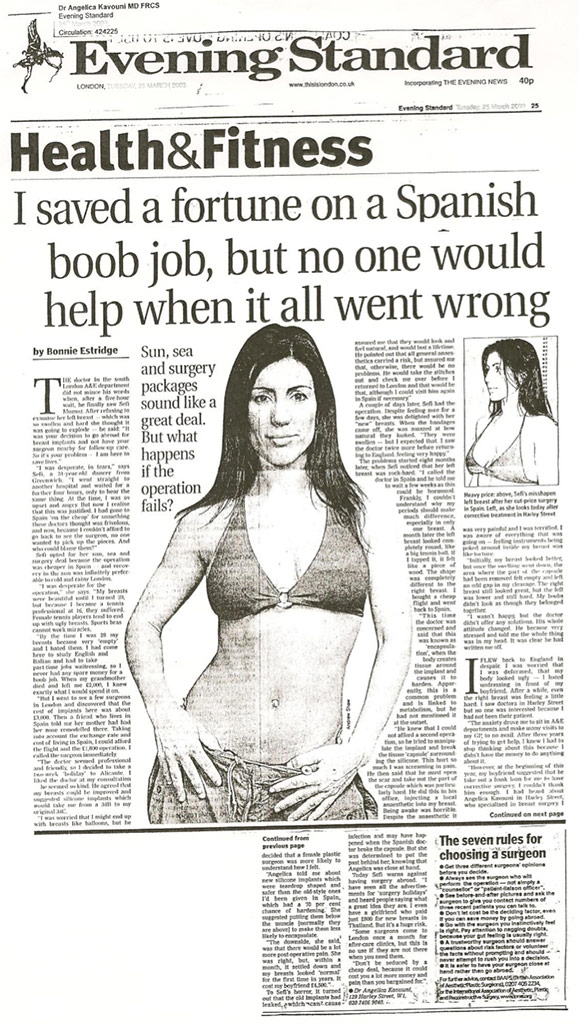