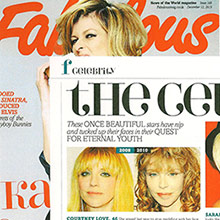 Courtney Love, 46. She vowed last year to stop meddling with her face after a series of botched ops on her nose, boobs and lips. But it looks like it might be too little to late for the troubled rock chick.

Courtney's eyes now have an almost feline look, most likely due to an upper facelift combined with eyelid surgery. Her angular jaw may be a result of silicone implants and her lower lip looks an odd shape. She looks far older than 46.

Katie Price, 32. She can't help herself. But at least Jordan holds her manicured hands up to the nips and tucks she's had. She had her first boob job at 18 and has gone on to have Botox, liposuction, at least one nose job and lip fillers. recent reports claim she admitted to "ruining her looks" with so much surgery. Leading plastic surgeon Dai Davies says: "You can tell she's had Botox in her forehead - there are no frowns marks. She looks much older than she is."

Sarah Harding, 29. With what looks like plumped-up lips and an impossibly smooth forehead, there's been speculation about Sarah's new look. Leading plastic surgeon Dai Davies says: "If she's had surgery, I think her lips are too big. She also looks like she may have had Botox. She certainly looks older than 29, though it could be down to a hectic lifestyle."

Alicia Douval, 30. The glamour model first went under the knife at 17 and looks a decade older then she is. Angelica says:

Alicia's had so much work that her face is almost unrecognisable. It's become hard to guess how old she is, a trap that many celebs (eg. Joan Rivers) fall into.

Lil' Kim, 35. The American rapper has admitted to the boob and nose jobs but there have also been reports of butt implants, a brow lift, collagen lip injections and skin lightening. Angelica says:

Kim seems to have chosen surgery that has turned her into a caricature of her former self. Her wide-open eyes could be due to an facelift of brow lift. I also think she's had a chin implant, giving her face an angular appearance.

Lindsay Lohan, 24. She may have denied rumours of lip surgery, but Lilo's face is starting to look very Freaky Friday indeed.

Dai says: "Lindsay's eyebrows are higher now, indicating a possible brow lift or Botox, even though Botox isn't designed for people in their early 20s. It also appears that she's had a lip augmentation - it's not to my taste."

Heidi Montag, 24. Heidi's plastic surgery (she confessed to having 10 procedures in one day, including a brow lift, chin reduction and nose job) makes her look as old as The Hills. Angelica says:

Heidi is clearly still beautiful but she looks older than her years. While she used to be pretty and uique, she's become yet another production line "ageless" blonde. 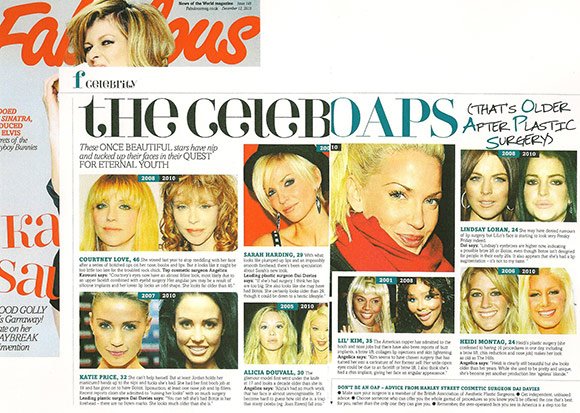