Liposculpture may be carried out on both men and women whose fat is distributed unevenly. Liposculpture is not a method of reducing weight, but rather an alternative for removing fatty deposits which persist, no matter how much exercise, massage or dieting is undertaken.

Ms Kavouni may require that you be within half a stone of your ideal body weight prior to undertaking surgery, as the liposculpture results carried out on an obese individual may be disappointing. This is because there is a surgically safe limit of fat which may be removed at any one time.

Please discuss your requirements fully with Ms Kavouni who will advise you of the possibilities of your expectations and whether it may require one, two or more liposculpture procedures in order to ensure you incur no unacceptable risk.

Diabetics are not excluded from liposculpture and the removal of fat has, in cases, reduced their insulin requirements.

Liposuction and Liposculpture
The Operation

Body contouring is a technique whereby fat is removed permanently and may be performed under general or local anaesthesia, depending on the site to be treated and the amount of fat to be removed. Liposculpture may be utilised in most areas of the body either as a sole procedure or as an adjunct to other procedures i.e. facelift, breast reduction or abdominal reduction. Before any fat is removed, the area to be treated is injected with a buffered salt solution containing adrenaline, which controls bleeding and a long acting local anaesthetic to ensure you will experience less discomfort after the liposculpture procedure.

Liposculpture, is an adaptation of Suction Assisted Lipoplasty (S.A.L.) a method of stroking a shaped metal tube, known as a cannula, backwards and forwards to loosen the fat which allows it to be removed by a strong vacuum pump. However, liposculpture employs the use of much finer cannulae allowing the removal of fat in a more controlled manner because they cause less trauma to the tissues and can be used closer under the surface of the skin giving superior results. Surgical time varies from 30 to 90 minutes depending on the extent of the areas requiring liposculpture.

Less extensive liposculpture is possible as a day case, but normally an overnight stay at the hospital is recommended. It is normal practice for the anaesthetist to give intravenous fluids to replace those lost during the procedure.

Liposuction and Liposculpture
After your Operation

Immediately after liposculpture the operated parts will be dressed with Elastoplast® or similar dressings which will remain in place for one week (showers and baths may still be possible during this period). The most important aspect of treatment postoperatively is the wearing of pressure garments which may be used for up to six weeks (three weeks day and night, three weeks overnight only). It is important to realise that although only tiny incisions (~3 mm in length) are made in unobtrusive areas, liposculpture creates a large wound hidden under the skin and adequate rest in the days and weeks after surgery will be required as well as regular gentle exercise. This should be balanced with early mobilisation such as walking following the removal of dressings.

Tenderness, bruising and swelling always occur after liposculpture, but this subsides over a period of weeks and the extent of this can be lessened by taking Arnica for one week prior to surgery and two weeks afterwards.

Postoperative discomfort may be relieved by mild analgesia such as Paracetamol (Aspirin should be avoided). Once the swelling has subsided, hardening of the treated area is usual. Massage is advised at this stage to soften and flatten the area.

Beauty therapists or physiotherapists should be considered for this task and many previous patients consider the results obtained, more than justified for the relatively small expenditure for professional massage. Do bear in mind that after liposculpture it may take several months for the area to return to normal softness.

Numbness and itching of the area may be expected initially and should gradually return to normal (permanent areas of numbness are rare). Infection after liposculpture is possible but unlikely and is easily treated by antibiotics.

Experienced plastic surgeons having access to the right equipment will be able to remove fat in a way, which minimises postoperative skin irregularities or asymmetry. It is possible however, that some difference of fat removal will be apparent, necessitating a minor secondary tidy-up procedure, usually six months after the first liposculpture procedure.

If large amounts of fat are removed, loose skin may be a problem dependent upon the skin site and type. Some patients are fortunate and have elastic skin which contracts well, whereas others (usually those with stretch marks) may require skin tightening procedures in addition to the liposculpture. Some procedures include thigh and abdominal tucks and your surgeon will be able to inform you of the likelihood and nature of the secondary operations.

Patients who have loose skin and/or dimpling (cellulite) are not ideal candidates for the liposculpture procedure. Indeed, lipoplasty or liposculpture could make these conditions worse. Time away from work depends on the areas treated and varies from 7 - 14 days.

At last, some good news for women plagued by the pesky lumps and bumps of cellulite, Cellulaze, a treatment that will smooth the skin’s surface and get rid of ‘orange peel’. With Autumn approaching, now is a good time to start getting the body in shape for next year’s beach parties. 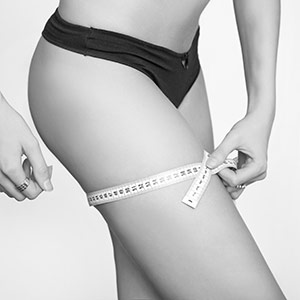 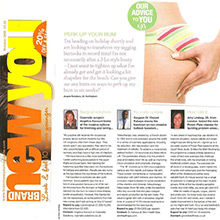 Our advice to you, perk up your bum 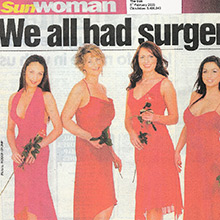 We all had surgery