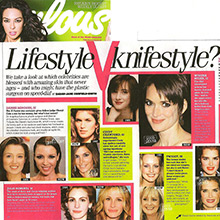 We take a look at which celebrities are blessed with amazing skin that never ages - and who might have the plastic surgeon on speed-dial.

Dr Angelica Kavouni, plastic surgeon and director of Cosmetic Solutions in London's Harley Street, says: "it looks like Dannii's had a brow lift, which is what creates the lovely arch in her eyebrow and makes her forehead so smooth. I think she's also had cheek implants, which create the chiselled-cheekbone look, and maybe an eyelid lift, which makes her look young and fresh."

Cindy Crawford, 43, refreshingly, supermodel Cindy has spoken candidly about her use or anti-ageing injections: "All I can count on is vitamin injections, Botox and collagen," she says.

Angelica says: "it's nice to hear a model admitting the truth. I can tell that Cindy hasn't had any major procedures, though. She's a natural beauty and always will be."

Julia Roberts, 41, the mum of three and Oscar-winning actress may have recently been snapped on the beach with a stretch-marked tummy, but heck, her face hasn't aged in 15 years.

Angelica says: "I think, Julia may have had some eyelid surgery to lose excess skin and fat - her eyes don't look like those of a 41 year old who's been exhausted by the demands of three children."

Winona Ryder, 37, the Girl Interrupted actress has barely changed since the late '80s -and as she approaches her late-30s, she's looking better than ever.

Angelica says: "I don't think Winona's had surgery - she must have very good genes. She may occasionally use Botox to get rid of fine lines, but nothing more than that."

Twiggy, 59, the former model has said that she's not ruled out surgery, but she is anti Botox: "I don't think it always looks great. Some women get addicted."

Angelica says: "While it's unusual for a woman of 59 not to have jowls around her jawline unless she's had surgery, Twiggy's face looks very natural, so she must just have very good genes!"

Sarah Jessica Parker, 44, the SATC star may not be getting her beauty sleep now she has twin girls but she's looking fab!

Angelica says: "It looks like SJP has had work on her eyelids to make them look less saggy. In her younger picture her top lids look quite full, but now you can see more of the eyelid."

Angelica says: "I don't think that Jade has had any surgery. She looks like she's put on weight as her face looks fuller, but I think this is down to eating better and being healthy."

Brooke Shields, 44, it's hard to believe that Lipstick Jungle actress Brooke is in her 40s, and while she says she hasn't had surgery, she's still coming to terms with the ageing process: "I wish I had the face I had a decade ago, but I don't. People say: "I love my wrinkles." I don't love my wrinkles!"

Angelica says: "I don't think Brooke has succumbed to the knife - she's probably using Botox and collagen to maintain her youthful looks." 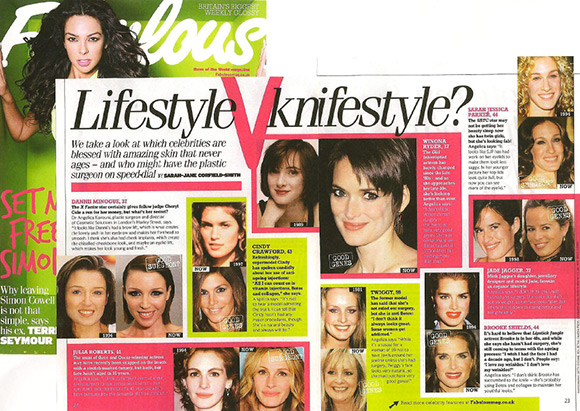