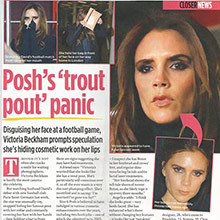 Though it's not often she cracks a smile for waiting photographers, Victoria Beckham is hardly the most camera-shy celebrity.

Bur watching husband David's debut with new football club Paris Saint-Germain last week, the star was unusually coy, snapped hiding her famous pout with her collar and constantly covering her face with her hands - then holding a bag in front of her face when catching the Eurostar home to London.

Now insiders tell Closer that Posh's behaviour was probably because of "paranoia over looking like she has a trout pout" - and indeed industry experts confirm there are signs suggesting she may have had treatments.

A friend says: "Victoria's worried that she looks like she has a trout pout. She's particularly self-conscious over it, as all she ever wants is a very discreet plumping effect. She's mortified and is saying: "I'm worried I've gone too far!"

Size 6 Posh is believed to have indulged in various cosmetic enhancements over the years, including two boob jobs - one of which she admitted to in 2005.

Comparing pictures of Victoria in France recently with photographs taken of her two weeks ago in London, leading plastic surgeon Angelica Kavouni explains:

Her top lip is markedly different to the earlier shot - it is now more full and shaped, whereas it is naturally very thin. "This is achieved by injecting filler into the lip. The lip outline has also been enhanced with filler - it shows a little lift.

She has a history of skin problems, but her complexion looks fantastic - I suspect she has Botox in her forehead and crows' feet, and regular skin resurfacing facials and/or facial laser treatments.

Her forehead shows the tell-tale sheen of recent Botox, so she likely tops it up every three months."

I think she looks great - very fresh-faced. She has enhanced what's there without changing key features - it looks like just "tweaking."

Victoria's achieved a very natural look thanks to what appears to be very subtle work. It takes more skill to produce barely noticeable results than it does to produce the "duck lip" look.

Top Harley Street surgeon Dr Michael Prager agrees that Posh must be using a "good practitioner" if she has had work done. He says: "There are no tell-tale signs of cosmetic work, but the absence of lines and wrinkles suggest it's likely she has Botox and filler injections. If she has had any work, it's been very well done and she looks very good."

And friends of the fashion designer, 38, who's mum to Brooklyn, 13, Romeo, 10, Cruz eight, and Harper, 19 months, say that, while Victoria spends a lot of money on regularly maintaining her appearance, she's desperate not to look like she's had "work done."

The friend adds: 'I'm not sure if she is more terrified of ageing or looking like she's had too much work done! She goes for the most expensive treatments, insisting that everything done is totally subtle but yet to her exacting requirements."

A spokesperson for Victoria didn't take up the opportunity to comment. 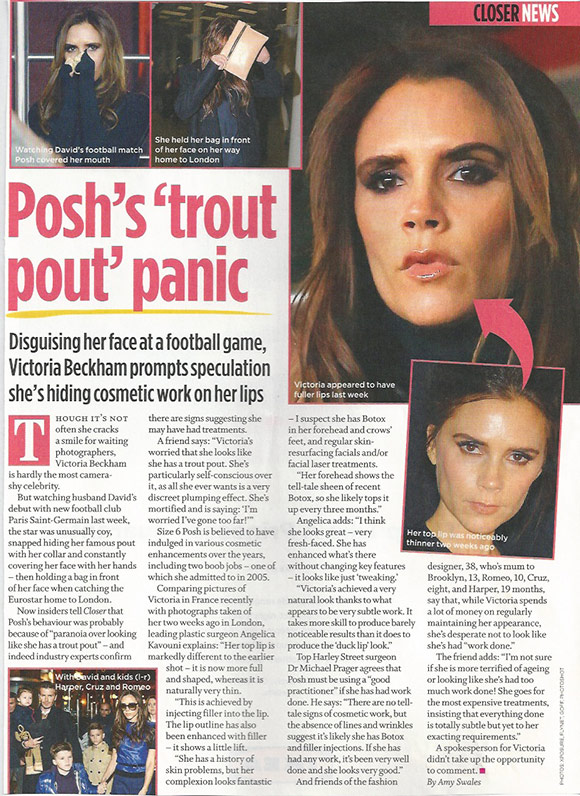